By the Board and General Manager of Washington Electric Co-op

As the most expensive form of renewable power in the state, net metering raises the cost of electricity to Vermonters who do not own such systems while it lowers the costs for those who do.

The members of Washington Electric Cooperative have a long history of supporting renewable energy.  The utility we own is one of three in Vermont to provide 100% renewable electricity around the clock from a varied portfolio of resources. A quarter-century ago when the solar industry was young and solar installation costs were relatively high, WEC became a leading host of members’ solar electric production through Vermont’s mandated net metering program.

However, many WEC members may not be aware of the growing impact that net metering has on the member-owners of WEC as that program expands. As the most expensive form of renewable power in the state, net metering raises the cost of electricity to Vermonters who do not own such systems while it lowers the costs for those who do. The resulting inequity is disturbing, and higher electricity rates are also likely to slow our members’ adoption of technologies such as electric vehicles and electric heat pumps, which are important to Vermont’s Comprehensive Energy Plan and the state’s efforts to combat climate change.

Given these facts, the state should review the goals and outcomes of its existing net metering program to develop a solar energy program that is more effective in providing renewable energy at lower cost to all ratepayers.  The Vermont Department of Public Service’s Net Metering Report included in its 2021 Annual Energy Report sums it up this way:

Net metering has made important contributions to Vermont’s energy supply mix; however, after more than 20 years and hundreds of MW of installed projects, it is past time for an overhaul of the net metering compensation structure. The primary resource developed under net metering is solar generation, which is also being developed through competitive solicitations at substantially lower costs. If Vermont is serious about reducing climate change, it is imperative that the state be willing to take an objective view of what programs are helping to achieve this purpose.

The state should review the goals and outcomes of its existing net metering program to develop a solar energy program that is more effective in providing renewable energy at lower cost to all ratepayers.

Most WEC members endorse the environmental mission of the Co-op, and support our proactive renewable energy efforts, including construction of the Coventry landfill gas project that provides most of our power, and the purchase of electricity from hydro, wind, and other renewable sources. The challenge that WEC and other utilities face is not residential solar generation. Solar power from photovoltaic (PV) panels, despite its intermittency, is clearly one of the greatest sources of clean energy to be tapped to reduce our dependence on fossil fuels, especially when it can be paired with battery storage.

The problem is the state’s net metering tariff requires utilities to overcompensate generators when excess solar power is exported to the grid, driving up the cost of electricity for everyone else.  What was useful in nurturing a once-young solar industry is now becoming wasteful and divisive. After 25 years of net metering it is time for the state to encourage the mature solar industry to stand on its own alongside other equally valuable renewable resources.

Why does net metering lead to an increase of electric rates?

The state’s net metering tariff enables net meterers to effectively sell their excess power to the utility at the retail price of electricity ($0.21/kWh), while other renewable energy generators could charge something closer to the wholesale price (typically $0.04 – 0.08/kWh). The issue here is not that solar array owners produce their own power, but that net metering rules allow the solar generator to export to the utility’s grid the amount of excess electricity it produces but doesn’t immediately use, and obligates the utility to generate and deliver that same amount of power back to the net metering consumers for free when they need it later, e.g., in the late afternoon and evening or when it’s raining or snowing. This is the “netting” of net metering.

Users of a solar array can, while the sun is out, immediately use the energy produced by their array for their own needs, and reduce their usage of power from the grid. If a solar user were to use all the power they produced, perhaps with the help of a battery-powered EV or other storage, no one should have a problem with that. In a similar manner, many customers also choose to reduce their usage from the utility grid by using more efficient appliances.

But net meterers do not operate this way. Instead, net metered solar projects produce power for several hours in the middle of the day and  require constant use of the grid’s power sources when their systems are not generating power sufficient to meet their needs. This is the challenge net metering poses to public utilities that are responsible for distributing electricity to the larger community – net metering requires the capabilities of the grid as much as any electric consumer, but state law allows them to pay comparatively little for them, thus unfairly shifting the burden to do so to other ratepayers.

This is not to blame net meterers, who are responding to an opportunity provided by the state. The state legislature devised the tariff structure, enforced by state regulatory bodies, that deliberately created a system that  shifts costs incurred by net metering to other ratepayers. 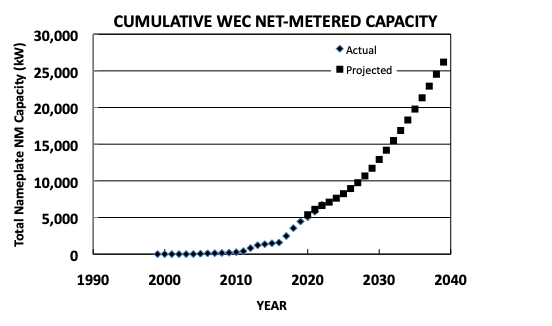 What is the impact of net metering on WEC?

The evolution of net metering capacity hosted by WEC since Vermont’s net metering program began in 1998 is shown in the accompanying figure.  The power listed is the nameplate capacity of all the net metered installations registered to WEC members, or in other words, the maximum power they could possibly produce. The projected capacity in the future was obtained  by modeling performed in 2019.

It is clearly a popular program. From 1998 to about 2016, the installed capacity of net metered solar increased rapidly, doubling about every two and a half years.  Since then, the growth has been nearly steady, as is typical for a mature industry. The current rate at which new net metered solar arrays are installed in WEC territory is about 900 kW per year.  By the end of this year, WEC expects a total of 7,100 kW of solar net metering capacity.

Of all your twelve monthly bills you pay each year, one month’s bill is devoted entirely to paying the cost of net metering to the membership.

This represents a cumulative rate impact of 8.3% attributed to net metering; if your bill is $100, over $8 of what you pay is the present cost of supporting net metering. Stated another way, of all your twelve monthly bills you pay each year, one month’s bill is devoted entirely to paying the cost of net metering to the membership. As evident from the trend in the figure, this amount will continue to grow rapidly over the coming years as non-net meterers are increasingly tasked with covering the cost of running the utility that serves all members.

Why is net metering so popular among WEC members?

WEC members already receive fully renewable power at all hours of the day. Net metering offsets renewable power members would get anyway, so net metering in WEC territory offers little additional environmental benefit.  Without the capacity for energy storage, net metering does not substantially reduce the need for existing power sources in the region either since solar production is not available much of the day.

The reason for its popularity today is that net meterers can save money on their power bills from the utility. At its inception, Vermont’s net metering policy was intended to foster the solar industry in Vermont and provide a means for residential solar PV owners who wished to produce renewable power to recoup some of their investment in small-scale arrays that were relatively expensive to purchase and install at that time. With net metering, one enjoys the convenience of reliable power from the grid while still reducing one’s power bill. As global events drive up the cost of energy, the value of such an investment probably increases. Indeed, recent national surveys of homeowners contemplating such a decision to invest in net metered solar cite reducing their energy costs as their primary reason.

Furthermore, as the cost of installing solar arrays has plummeted over the last 20 years, and arrays of up to 500 kilowatts in capacity were made eligible for net metering in Vermont, there exists a strong incentive of partnership with for-profit, market-scale generation in which net meterers are licensed to connect directly to the grid and compensated entirely at a rate comparable to statewide retail electric rates. In effect, they are generators feeding directly into the grid, and being compensated at near retail rates, with no netting taking place. While it’s possible that small-scale hydro or other renewables may justify some level of subsidization, the expansion of net metering to other renewables at a commercial scale indicates that net metering is simply becoming a profit-making enterprise that has little to do with the original intent of net metering to  foster small-scale solar.

The road to sustainability

Vermont’s Renewable Energy Standard took effect in 2017. This standard mandates the amount of renewable electrical energy utilities must provide and by what year it must be provided to meet the goals of the state’s Comprehensive Energy Plan. In delegating to the public utilities the charge of renewability, the Renewable Energy Standard is sound policy because it lays out clear targets for the public utilities without being overly prescriptive of the means while maintaining the essential regulatory requirement to reliably and safely provide electricity at reasonable cost to the Vermont ratepayer.  It is clear that today’s electric utility will develop revised approaches in order to expertly manage intermittent sources of inexpensive renewable electricity.

The net metering tariff is not outdated because it is solar, but because the overly generous compensation for the excess power is unfair to the ratepayer, to other providers of renewable energy, and to those innovators who seek to revolutionize the usefulness of solar-generated electricity with battery storage. We expect that many residential and commercial customers will continue to lower their consumption of grid-supplied electricity via conservation or by producing their own electric power. But the current scheme of net metering, while successfully nurturing a once-young solar industry, effectively rewards use of expensive electricity to benefit the few at the expense of the many, and is not a sustainable long-term model for decarbonizing everyone’s use of energy.

We encourage stakeholder discussions to find more practical, forward-looking schemes for solar deployment that take advantage of the past 25 years of experience.

With this positive outlook in mind, we believe that, having done its job, the state’s net metering program should be reexamined for fairness and effectiveness in achieving the state’s energy goals. Echoing Vermont’s Department of Public Service, we urge our legislators to evaluate the consequences of net metering and consider if these are the outcomes they intended. We believe the law will soon need to be revised. We encourage Co-op members to contact their Board members with questions and comments.